“unfriending” what does it really mean?

I read this article the other day (about killings apparently because of Facebook) and it really disturbed me, it bought me back to a 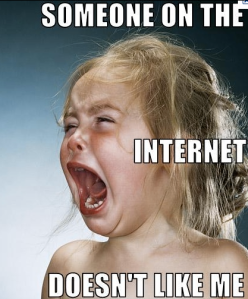 Social Media is both all about personal communication and about anonymity.

You can communicate with thousands of people, yet you can post things without people knowing who you are, you can spurt hate out to the web, commenting on posts, tweets, anything.  I mean even I have a pseudonym, for those times where I want to stir the pot and not have an effect on my company. (no.. I have never trolled!)

It’s interesting to reflect that whilst the ability to be anonymous gives you the freedom to post as you want, however you want, whenever you want.  Your anonymity can be very personal for other people.  I had “someone” troll my blog once, (by “trolling” I mean, adding mean, cutting comments, just to be mean, not adding any valuable comments to the post) and it really did take up a lot of my mental energy for a few days

One of the most offensive things I’ve seen however seems to be the “Defriending”, or unfollowing option, whatever you want to call it.  It seems to be a bit more “personal” on Facebook or LinkedIn than on Twitter, Google+ etc

I must admit, I have “defriended” someone on Facebook, for personal reasons, and felt decidedly awkward when I received a new “Friend invite” the following week.  I actually had to “man up”, call the guy and explain myself.  “In Real Life” Communication, who have thunked it right?

The internet makes it easy to lose those social graces.  You can snipe easily at people, (as a father of 3 cyber bullying scares the crap out of me!), You can “unlike” people, and “write” them out of your life if you will at the quick of a button.  The idea of thinking of the repercussions of what one’s actions would have on someone else are disappearing in this easy comment medium.  Be responsible for what you say, and what you do people, there can be consequences, as that higher article proves.

Posted on February 22, 2012, in Uncategorized. Bookmark the permalink. Leave a comment.